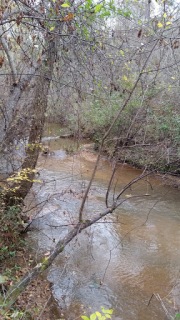 There’s a progression to my career path that for now ends with farmer: electronics technician, computer programmer, English teacher, and tree farmer.  It’s an odd mixture, but it represents my personality and my eclectic range of interests and abilities.  I do so love the logic and the beauty of math and science, but I also love the beauty of a well-written sentence.

Still, who would have thought I would ever become a tree farmer?  Or know so much about bees?  Or wear snake boots?  But, as of Wednesday, we own 20 acres of pine trees, so we are officially farmers!   We’ll still be teachers for at least 10 more years, but we will be able to recharge our mental batteries by working in our woods on long weekends.    Spending time in nature has always helped us get back to enjoying teaching when the demands of teaching start to obscure the rewards.

Wednesday itself was not a stress-free day!  We’ve bought and sold enough homes to anticipate surprises at closing, and this time was no exception.  Those surprises were followed by learning that the utility company we were told to contact doesn’t actually own the power lines that run along our property.  Their lines end a mile away, which makes connecting to their supply an expensive prospect at $4 a foot!  We’re meeting with an engineer from the company that does own the power lines next week and hope to be able to get electricity for less than $20,000!   On to the septic system permit — after much back and forth and $450, we finally have a permit for our second choice of locations at which to build our cabin.  We don’t know why the septic permit guy didn’t give us specs for our first choice, especially as the soils engineer typed his report with analysis of both sites.   That’s going to necessitate another round of phone calls and probably more money.  We’ve been researching composting toilets as an alternative, but as this will be our retirement home we have to consider our ability to empty the compost when we’re in our 70s and beyond.

The good side of Wednesday was spending time on the land, walking down to the creek, and investigating a natural spring that may become a series of shallow ponds with mini water falls on its way downhill.  Now that we own the land, I feel that I am allowed to snap off dead branches and vines to make my path through the woods a little easier!  As I now also own the brambles, I can threaten them with retaliation when they stick their thorns in me. 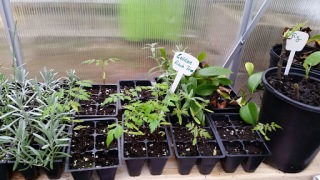 Back in the city, I can look at my 30 pots of day-lilies, my rosemary cuttings, my Goldenraintree seedlings, and all my magnolia seeds hibernating in the crisper drawer of the refrigerator in the garage as they apparently need that in order to germinate.  I’m already mentally planting the trees they will (hopefully) produce.  So, while my husband plans building foundations and septic systems, I plan gardens and avenues of pretty trees.  I envision a grove of Goldenraintrees — our own little Lothlorien nestled among the pines.